Another day gone by in Sochi, Russia and we really are blessed to be witnessing a tournament of this magnitude during these turbulent times. The tournament has kicked off with a bang, and to add to the excitement, we will soon welcome the World Champion, Magnus Carlsen, as well as other top players in the second round. Unfortunately, in contrast to the anticipation of adding the world’s leading players into the mix, we will also have to say goodbye to some of our African fighters who gave it their all, but just fell short of progressing in this event. Although it is with a heavy heart that we say goodbye to these players, we are also enthused by the eight players who will soldier on in the tiebreaks! Let us take a look at what happened in the African camp.

On day one, sixteen of our players suffered setbacks and had to win on demand to survive the knockout format. We are proud to report that four of our players fought valiantly and managed to claw back the deficit. GM Abdelrahman Hesham, GM Bilel Bellahcene, IM Chitumbo Mwali and WIM Sabrina Latreche all managed to beat their higher-rated opponents and will have to chance to advance to the tiebreaks.

This local derby was really living up to our expectations. After day one it looked as though Adly had booked his ticket to the second round, but Hesham had other plans. Nothing is predictable in this match-up and it will be exciting to see how the tiebreaks will shape up.

We reached this very interesting position from the Bogo-Indian Defence. Black is putting a lot of pressure on White’s e-pawn. I really like the way that Hesham continued here. What would you play here?

Black has just grabbed two pawns, but White has sufficient compensation and a bit extra due to his good coordination and well-placed pieces. Due to this pressure, Black has to tread carefully to keep the balance. Black immediately went wrong with 21…Qe6 and White can now gain a big advantage.

White is an exchange up, but Black is still kicking. Hesham now makes a very interesting decision to give the exchange back with 37.Rexd2!? and rely on the b-passer. This decision paid off as the position transforms into a winning rook endgame. Hesham’s play in that ending is really instructive and it would benefit the reader to take a look at how he converts the position.

Playing in must-win situations is always nerve-wracking and one can sometimes doubt oneself. However, the game played by Bellahcene showed no sign of nerves. He just went to the board and created a masterpiece. I have decided not to dirty this game with any of my notes, but just to allow you, the reader, to enjoy this demolition of the Black pieces in the Marocsy Bind.

“The ‘Copper Eagle’, Chitumbo Mwali, took GM Haik Martirosyan in his talons from the English fields and flew him high into complications before crushing down on him!”

After a rough first day, the Copper Eagle took flight and grabbed the scalp of the GM Haik Martirosyan, who was cowering below in the open fields of English complications. These two players had a massive brawl today in the English Opening and it will be interesting to see if they will carry this spirit of play into the tiebreaks.

White’s position has come under quite a lot of pressure from the opening. If Black is left to do whatever he wishes, it seems that White will have to suffer quite a bit. In these types of situations, it is advisable to create some practical complications in order to throw your opponent off balance. The move Mwali played next is both practical and principled.

What a crazy position we have just 12 moves after our previous diagram. What is going on here? Your guess is as good as mine. It seems that Martirosyan also did not understand what was going on and he immediately started going astray. Pieces started falling left right and center!

The final error. How did the Copper Eagle finish off his opponent?

WIM Latreche was the only woman to end the day with a win. Let us see how she managed it:

After an interesting Sicilian position, which included a pawn sacrifice by White, Black mysteriously blunders out of the blue. White to play and win.

White used her extra piece to great effect and liquidated down to this position. Now, this is obviously winning in many ways, but Latreche went for the very direct 45.Bh5+, which trades down into a pawn endgame that she correctly evaluated as winning for White. This strategy worked for her in this case, but in my view, it was an unnecessary risk. Pawn endgames are notoriously known for being tricky and trading down to one when there are other options seems practically suspect. Fortunately, it all worked out for Latreche who will be hoping to carry this form into the tiebreaks.

I am pleased to report that all the players who achieved a result on day one managed to secure tiebreaks. As it stands, GM Bassem Amin is the only player from our contingent who has qualified for the second round, courtesy of a bye. We have eight more players who stand a chance to advance to the second round (only a maximum of seven can go through since in the Adly-Hesham match one of them, unfortunately, has to bow out).

GM Adham Fawzy will be one of Africa’s hopes in the tiebreaks after achieving two draws against the experienced GM Evgeny Alekseev from Russia. Although the first draw with the white pieces was pretty simple, Fawzy was under some pressure today. But Alekseev could not find the correct way to try and realise his advantage, and the game quickly ended in a draw.

After suffering quite a bit on day one to achieve a draw, Wafa turned the tables on Skripchenko and made her work to stay in the event. As is often the case with higher-rated players, they are lucky!

After some awkward opening decisions, White has just grabbed the c5-pawn. The natural reaction is to recapture with the queen or to prepare to capture with the bishop (7…e6). However, Skripchenko played ambitiously (?) with 7…Qg6, but this is just a terrible decision after which White just wins material.

White has just achieved a winning position. There are absolutely zero chances for Black here.

White has played very well up to this point and is very close to realising her advantage. However, this is an interesting moment. To take on h3 or not to take? Objectively, either way is fine for White, however, I believe, one is principled and the other is not. Wafa decided to take on h3 and this allowed Skripchenko’s king to become an active participant in the endgame via f5 and later even e4 and f3, which was enough counterplay to achieve a draw.

Ayaz Moaataz from Egypt was the main headline from an African perspective on day one, after she beat former World Champion, Anna Ushenina. She only needed a draw to advance to the second round, but that would turn out to be quite a challenging task as Ushenina came back strongly, as all champions do. She won a very nice game in a Carlsbad structure, which you can find below. 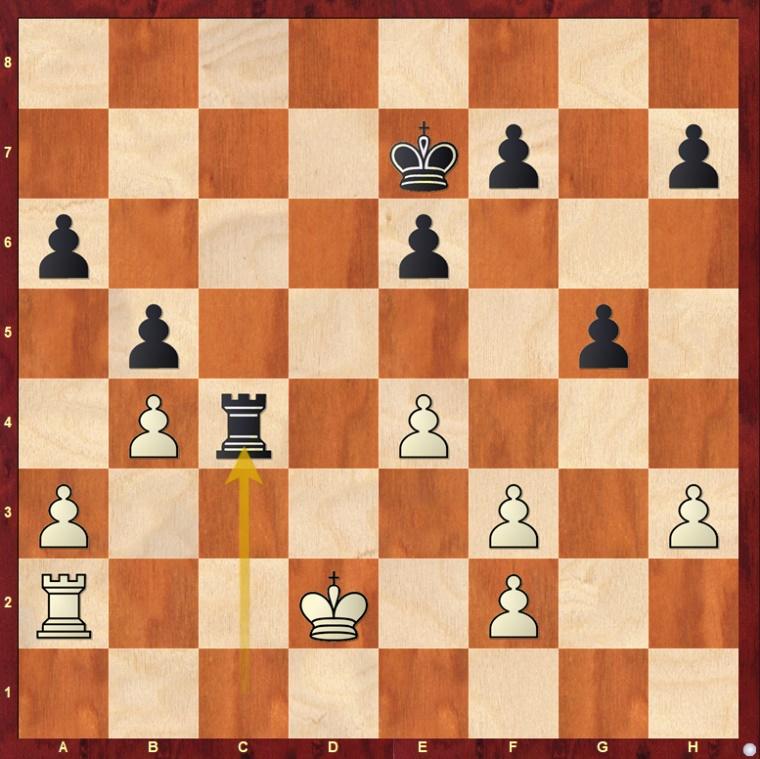 An interesting rook endgame where Black has the more active rook and better structure. Motylev plays the final technical phase quite instructively. 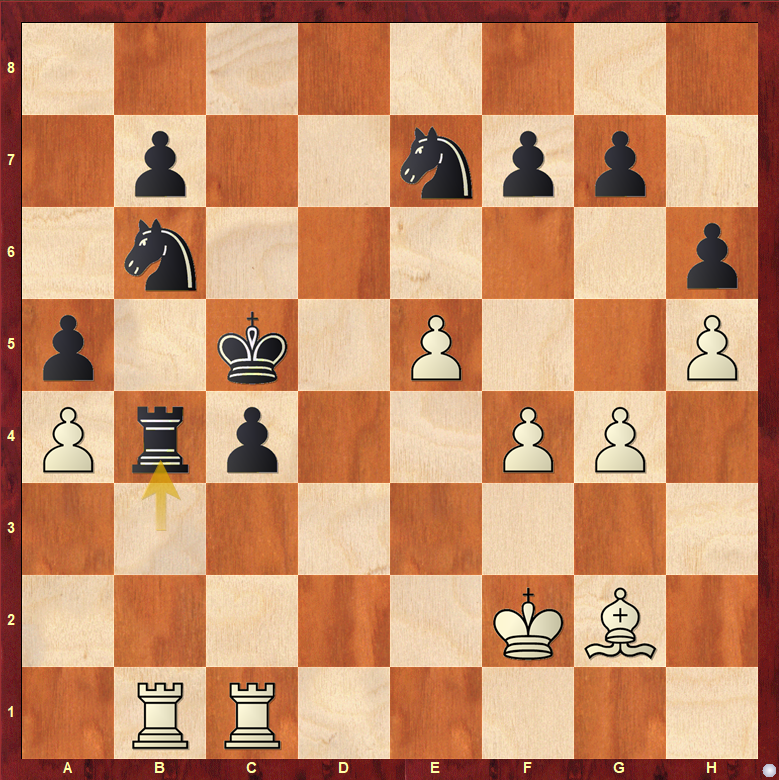 This was another very interesting practical endgame. Black has the bishop pair and the better structure, therefore he should have an edge here. The game eventually watered down into a drawn rook ending, which Sergio handled quite well until a fatal blunder at the very end of the game.

Once again, the positions that we have showcased in this article are only the tip of the iceberg of what happened in this round. There were many more interesting games that deserve further attention. Just to mention a few, we have the interesting queen-less middlegame in Adhiban-Chipanga, a fascinating material imbalance in Makoto-Kovalev, a beautiful victory by GM Rasmus Svane as White in the Benko against GM El Gindy, a curious pawn structure with its own intriguing strategic complications in Tissir-Kovalev and an unfortunate draw in a better position in February-Gunina.

To conclude, I cannot applaud our players enough for fighting tooth and nail in every game. Although some of them will have to travel home now, I believe that they can hold their heads high knowing that they have made their respective countries, and Africa as a whole, extremely proud. We hope that they will take this invaluable experience and come back even stronger next time. And all the best to those who still have a few more games to play.

Scheduled to take place from July 12th (Round 1) to August 6th (finals), the 2021 FIDE World Cup will gather together in Sochi (Russia) 309 of the world’s best chess players, with 206 of them playing in the Open World Cup and 103 participants in the first ever Women’s World Cup.

The top two finishers in the tournament, aside from World Champion Magnus Carlsen who is also participating, will qualify for the 2022 Candidates Tournament, in addition to winning the 110.000 USD first prize (80.000 USD for the runner-up).

pawnwonder
Born in Windhoek, Namibia, Dante Beukes is an International Chess Master. A 2x Namibian Chess Champion, as well as the current u18 African champion. He has won several tournaments in Namibia, as well as outside of his home country, at both a junior and senior level. He has represented his country on many occasions, not only in chess but also in athletics. Currently, he is focused on improving his chess skills. In addition to chess, he is an avid reader, casual tennis player and has now started writing.

Latest posts by pawnwonder (see all)